How To Use Crypto In Your Daily Life Using The Crypto.com Visa

As you know, crypto/blockchain networks are decentralized and that means that the operation and security of the network is distributed over a whole lot of people. In order to incentivize people to participate in this way, people are paid to help secure the network.

There are various models for how this works, but one of them is staking.

Now, there are a few definitions to this term. One has to do with how the network is secured… and the other  is just a general term referring to earning interest on your coins.

For most normal people, staking means that you’re simple parking some of your coins into a smart contract and then sitting back and earning interest income on those coins. It is a nice little form of passive income.

But, behind the scenes, those coins that you’re staking are actually playing a role in how that particular cryptocurrency functions. The staker participates in approving transactions on the network and usually has voting rights on the development of the network itself. The amount of crypto the staker has affects the weight of their “vote” on verifying, processing and recording transactions on that blockchainBlockchain is the technology that underlies cryptocurrency. Not just Bitcoin, but all of them. Blockchain is a kind of ... Click for full definition. This is how proof-of-stake networks function, where you are required to stake certain amounts of coinSometimes referred to as a token, or a coin. The two terms are used pretty interchangeably. Essentially, it is a digital... Click for full definition in order to be eligible to run a nodeBlockchain is powered by a large network of miners. Those miners can be either single computing devices... or entire far... Click for full definition on the network.

Essentially, it is a way for participants on that network to show they’ve got some skin in the game. 🙂 This shows they hold an interest in the success of that network and therefore will act in it’s best interests and help the network function. If the network finds that a particular node is acting erratic or trying to feed inaccurate data to the blockchain, they can be booted from the network and lose their staked coins.

So, if this is what staking means, how is it that “normal” crypto holders can stake coins, earn an income from it, but not participate in running a node?

Well, there are 2 kinds of staking.

A proof-of-stake network is the primary kind, where only actual node partipants in the network can stake coins.

The other kind is called Delegated Proof-of-Stake (DPoS), which is when any coin holder can stake their own coins to a participating node. In other words, you can stake your coins to a node, earn passive returns on those coins, but you’re not actually running a node yourself. You and whole bunch of other people are staking coins to a node… and all of you are earning a return.

As an example, the Tezos network works this way. And if you hold Tezos right on CoinBase, you can earn a return on those coins right there in your Coinbase account. 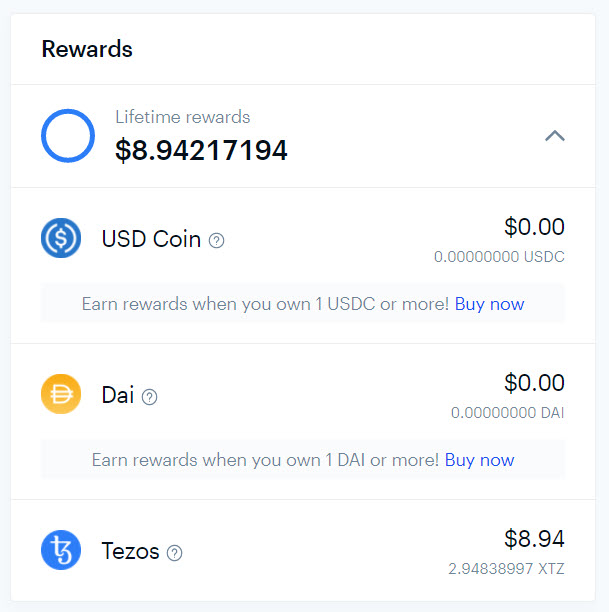 You will receive earnings roughly ever 3 days. You are not actually running a node and probably would have no idea how to. 😉 But, Coinbase is running a node and helping the Tezos network function. You are delegating your Tezos coins to the Coinbase node. You receive part of the earnings from the network as a result.

This term staking has become to be used in a more generic sense in the world of crypto, too. Some people are now using it to refer to any situation where you are earning a return on your crypto holdings… even if it has nothing to do with a proof-of-stake network. For instance, Crypto.com used the term “staking” to refer to simply allowing your crypto to be used in their loaning process. They pay you a return rate for that. They call it “staking” since the coins are locked up for a period of time. However, it has nothing to do with helping to operate a node on a proof-of-stake network.

So, this term “staking” is also used generally by many to refer to any situation where you are earning an average annual percentage rate return on your coins.