How Do You Transfer (Or Move) Cryptocurrency?

Are you scared to move it? 🙂

If so, you're not alone. It is natural to be weary of rocking the boat on something you don't really understand.

What if you get something wrong and - poof! - your money disappears? That would suck, right?

Well, let's simplify it. Trust me, it isn't hard or unreliable to move your crypto around. Once you've done it a few times, the novelty wears off and it doesn't stress you out anymore.

What It Means To Transfer Or Move Crypto

In another article, I talked about what a wallet is. When you "move" crypto, all it means is that you are sending a bit of your coinSometimes referred to as a token, or a coin. The two terms are used pretty interchangeably. Essentially, it is a digital... Click for full definition from one walletWe know a wallet as a thing you keep your money in. In cryptocurrency, we use the word wallet to refer, likewise, to a p... Click for full definition to another one.

It is a transfer.

You may be doing it in order to pay a third party and buy something... or you might just be moving it to another wallet that you personally own.

Technically speaking, you're not really "moving" it. The crypto is still on the public blockchain. All you're doing is assigning it from one wallet to another wallet. But, since we're so USED to the idea of money feeling kinda tangible, we think of it as "moving" it even though it isn't.

As you get more involved with cryptocurrency, you are likely to have multiple wallets.

First off, every coin you own has it's own wallet. Even if you're using a single company (like Coinbase) or a single device (like a Ledger), each coin you have is stored in its own wallet.

You may want to simply keep your crypto distributed in other locations and not all in one. For instance:

We can talk more about coin distribution a little later. For our purposes here, however, you can just see there are multiple reasons why you might want to move some or all of your crypto holdings.

First, Get Your Wallet ID(s)

Transferring crypto is a simple transaction. You're going to SEND from one wallet... and RECEIVE on another wallet.

In some interfaces, they'll call it WITHDRAW (for sending) and DEPOSIT (for receiving). It's all the same thing.

You're going to need to have the wallet address for the wallet you are sending TO.

Now, if you read through my explanation of crypto wallets, you know that your wallet address is your public key. It looks like a big pile of numbers and letters. For instance, here's one of my own personal Bitcoin addresses:

It is long and nasty. 🙂 But, that's a crypto address. In this case, Bitcoin.

Other coins have their own wallet addresses. Here's one of my Ethereum wallets:

Now, you don't need to memorize that. It's freakin' impossible. But, you DO need to fetch the wallet ID for your wallet that you want to send coins to. And it needs to be the wallet address for the type of coin you're sending. For instance, a Bitcoin address is different than an ETH address.

Many coins are tokens that operate on the Ethereum blockchainBlockchain is the technology that underlies cryptocurrency. Not just Bitcoin, but all of them. Blockchain is a kind of ... Click for full definition, so in many cases your wallet address for these coins will all be the same. All your ETH address.

Every wallet has a slightly different interface, but the concept is usually the same. For the wallet you want to RECEIVE funds with, go to the "Receive" or "Deposit" section and you will usually see your wallet address right there. You can copy/paste it.

In Coinbase, here's what it looks like when I go to the "Receive" tab on my Bitcoin wallet: 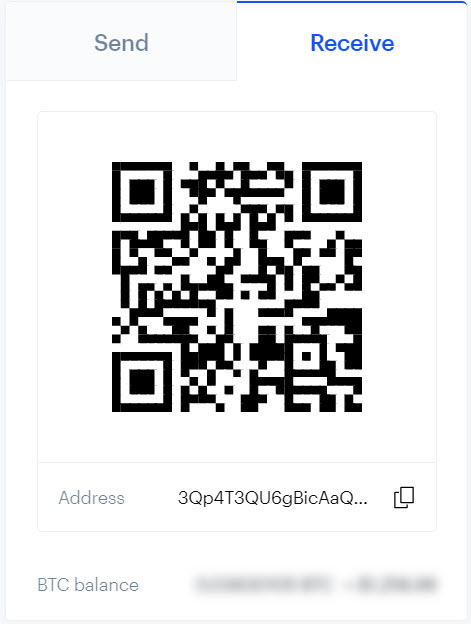 You can see the wallet address right there and you can copy it to your clipboard. Or, if the wallet you're sending FROM is on a mobile device, you can just scan the QR code as a shortcut.

Next, Send The Funds To That Wallet

OK, got the wallet address of the wallet you want to send funds to? Cool.

You decide how much coin you want to move.

In most cases, you will also need to CONFIRM your transfer before anything happens. If you're on a hardware wallet, it will usually have you confirm the destination address right on the hardware wallet screen. For exchanges like Coinbase, they'll probably ask you to verify it via email, text code, or two-factor authentication. This is a security feature to ensure that:

One little piece of advice...

When you're confirming your destination address visually, you don't really have to manually sit there and compare every little character in the wallet address.

I mean, you can if you want. 🙂 It won't hurt anything.

And, in every transfer I've ever done, I've never had the wallet address be different at the confirmation stage of the transaction. This stuff is really pretty reliable. But, it is good to check. Only takes a few additional seconds.

NOTE: Only Transfer To Compatible Wallets

Just a word of warning in case it comes up...

Never mix and match. It won't work. You cannot transfer coins between different wallet types and expect some kind of magical conversion to take place. That's what exchanges are for. 🙂

If you transfer coins to an incompatible wallet, you should get a warning first so you cannot even do it. But, otherwise... your coin might just disappear.

When you transfer cryptocurrency, you're going to pay a network fee.

Now, many people hear that word "fee" and their mind flips back into "old school" finance and they figure it is a company or bank charging them a transfer fee. In crypto, that's not how it works.

We can talk more about this in another article, but these crypto networks use network fees to help fuel the network itself. It helps incentivize the miners and nodeBlockchain is powered by a large network of miners. Those miners can be either single computing devices... or entire far... Click for full definition owners to run the actual network.

Network fees don't go to any particular person or company. It is distributed automatically by the network to the miners. These miners are literally what power the entire thing. They pay for all the energy. They make the network function.

Now, in most cases, the fees are small. And it based on the transaction, not a percentage.

For instance, if I transfer Bitcoin, I'm going to pay the same fee whether I move $10 worth... or $10,000 worth. Because I'm paying for the transaction, not the market value.

Network fees can go up and down... and do so in real time. A really busy network is going to have higher fees. If the network is slower, the fees will be lower. It is all controlled by the algorithm.

All this to say... when you transfer crypto, you will pay a small fee. It will come right out of the transferred amount, usually. For this reason, the amount of crypto you get in the receiving wallet might be slightly less than you actually sent.

The fee is usually tiny. For instance, you can usually transfer almost any amount of Bitcoin and the fee will be the equivalent of a few cents worth. It is usually quite cheap. Sometimes, on Ethereum, the transaction fees can get really high because of network demand. You'll want to pay attention to the fees, particularly with ETH and any coin that runs on the ETH network.

You've confirmed a transaction and now you're waiting for the transfer to take place. For some, this is nail-biting time. 🙂 Especially those first few times you do it.

Will the coin arrive?

There's sometimes that time in between... where the coins have been removed from your sender wallet but have not yet shown up in the receiving wallet. It looks like they disappeared. 🙂 And it can be nerve-wracking.

But, don't worry. 🙂 It can take a bit of time for the network to work. And some blockchains are faster than others.

I have never personally "lost" coins during a transfer. As long as you indeed confirmed that the wallet you're sending to is your's, it WILL show up.

Some wallets detect the incoming funds pretty quickly and will show the incoming coin pretty fast. It will be there as a "pending" transaction until it gets enough network confirmations. But, in the meantime, you can at least see it and derive some confidence from that.

Many times, the sending wallet will give you what's called a transaction hash. It is like... a transaction ID. And, you can then use that transaction ID to look it up on the public blockchain and see things happening.

In some wallets, they'll make the transaction has clickable. Just click the link and it will open up the block details. 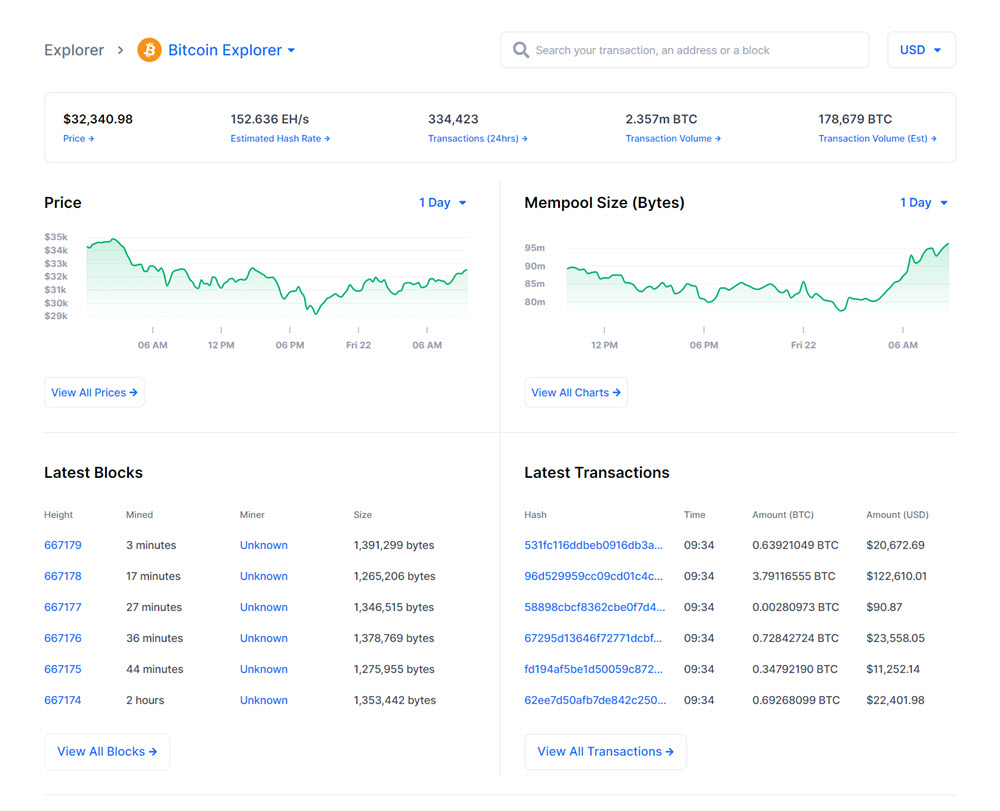 It's an interesting thing to watch since you will see your transaction bundled with a whole bunch of other transactions from other people. They're bundled into a "block"... and the whole thing sits there and waits for confirmations from the network. You can monitor the confirmations in real-time.

Transferring crypto is a pretty simple thing, really. It just feels weird the first few times you do it.

You're just moving from one wallet ID to another one. That's all it is.

It can feel like a mind game the first few times. So, one thing you might want to do is try your first 1 or 2 transfers with much smaller amounts. Amounts that, if you were to lose it, you wouldn't sweat it.

Trust me, you won't lose it. 🙂 These networks are pretty damn reliable. The only way you could lose it is to accidently send it to the wrong wallet.

But, give yourself some confidence and try a smaller amount. Just to see how the process works.