When it comes to crypto, you keep hearing this term "blockchain". What the hell is blockchainBlockchain is the technology that underlies cryptocurrency. Not just Bitcoin, but all of them. Blockchain is a kind of ... Click for full definition?

Blockchain seems complicated. And certainly, once you jump into the development side of it, it gets that way really quickly. However, the core concept isn't that hard at all. And, if you're going to do anything related to crypto, I think you should at least understand the concept of blockchain.

Blockchain is the technology that underlies cryptocurrency. Not just Bitcoin, but all of them.

Blockchain is a kind of database.

A database is a collection of information stored on a computer. It is structured into a table format, allowing the data in that database to be more easily searched and queried. If you've ever seen a spreadsheet (like Excel), then you see the rows and columns. That is, in essence, what a database table is. Collectively (a whole lot of those tables),  it is a database. 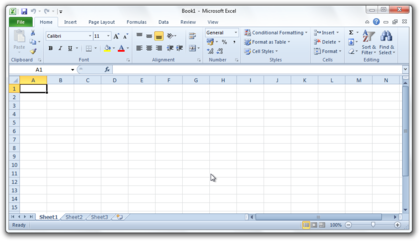 A spreadsheet structure (rows and columns) is the typical nature of a database.

A spreadsheet is simpler and designed for one person to operate it and use it. A database is designed to hold a lot more data and be accessed by a whole lot of people at once. But, in terms of basic design, the concept is the same.

Most databases are stored on a server... or a whole network of servers. And those servers are owned and operated, usually, by a single company. Whether you're talking about a small database (like what powers this very website and stores all the data)... or a HUGE database like the Google search database... that database is STORED on servers. Those servers are owned, maintained and controlled by some kind of company.

OK, back to blockchain...

How Blockchain Is Different Than Traditional Databases

A blockchain is a TYPE of database. But, it is structured inherently differently.

See, as mentioned above, a normal database is built on a table structure (like a spreadsheet). A blockchain database is stored in a.... chain structure.

With blockchain, each link is called a "Block". Each block contains data and has a certain capacity. Once the block is filled, it is chained to the block before it. As the network works, new blocks are filled with data and, once full, is then added to the previous block. And on and on it goes.

The way it is "chained" together is done using cryptography. So, the net effect of all this is that the blocks are put together in chronological order. And cryptography enforces the order of blocks. This is part of the security of blockchain because you would KNOW whether the blocks  have been corrupted or not. As each new block is added to the chain, it becomes a permanent, irreversible part of the chain. That one fact is what allows it to be decentralized.

While a traditional database is usually managed by a central company who owns the servers, the nature of blockchain allows it to be spread out all over the place. In other words, decentralized.

A full copy of the blockchain could be stored on numerous servers all around the world. But, the very nature of the cryptography which holds it together means that it maintains data integrity. If any one of those servers are tampered with to try to alter data on the blockchain, then the rest of the network would notice. Because the chain was broken and it isn't the same as the chains on the rest of the network.

Let's Take Bitcoin As An Example...

Bitcoin is (or was) the first application of this new technology of blockchain. So, we can look to how Bitcoin works to see blockchain in action and better understand how it works.

Bitcoin is a financial ledger. The blockchain is a big, public database and it contains a record of every transaction that has happened in Bitcoin since the very beginning.

In the case of Bitcoin, these nodes are spread out worldwide, all owned by different people, different companies. There is no central authority over Bitcoin.

So, how do you keep the data intact across such a network? How do you know whether any node owner tried to tamper with it?

The answer is blockchain.

The way blockchain is chained together means that it is KNOWN if the chain was messed with. The chain is irreversible. Try to reverse it and.... well, you just can't. If one node contains an error on the blockchain, it can use the chain on any of the thousands of other nodes on the Bitcoin network to fix it's own chain. So, the whole network is self-correcting and just doesn't permit anybody to hack it or alter the history.

With Bitcoin, each block contains a list of transactions. Once a block is full, it is added to the blockchain and the network starts a new one. This happens roughly every 10 minutes.

That's not a full explanation for how Bitcoin works (we can do that one later), but it does cover the use of blockchain when it comes to Bitcoin.

With Bitcoin, the blockchain is basically a big transaction ledger. But, blockchain technology can be used for all kinds of data. Product inventories, votes in an election, asset records, contracts, citizen IDs... you name it.

Blockchain is a database design that is built to enable true decentralization. But, that doesn't mean it always is.

See, it comes down to control.

However, the technology of blockchain can (and is) also used in proprietary environments. Anytime the nodes that are running the blockchain can be controlled by one (or a few) organizations, then it isn't really decentralized anymore.

The tech still works and offers numerous advantages. This is why some companies and governments are beginning to use blockchain "in house". For instance:

The list goes on and on. In each of these cases, the technology of blockchain is used to ensure data integrity and radically speed up service. But...

These are still centrally controlled blockchains.

There are definitely advantages. And it is decentralized data in that it can now not all be housed on one server farm, sitting in a room. But, if the nodes that control that blockchain are centrally managed, it is still centralized.

Blockchain can be used in a lot of different ways.

You will have the proprietary blockchains... and the truly decentralized ones.

That's Blockchain... In A Nutshell

A lot of people throw "blockchain" around as a synonym for Bitcoin. It isn't. Blockchain is a LOT bigger than Bitcoin.

We can thank Bitcoin for bringing blockchain into the world. IT just shows how world-changing Bitcoin truly is. It isn't just about it's effects on finance. It is also about all the other uses for the underlying technology of blockchain. It is immense.

The tech is still early. Improvements are being made.

For instance, one of the issues with many blockchains right now is that they're a bit slow. Some blockchains are faster than others. The Bitcoin network, for instance, is pretty slow.... while there are other blockchains capable of processing up to 30,000 transactions per second.

So, we're early. But, things are moving quickly.